From San Francisco, it was a 3-hour bus drive to Reno. It was incredible to see how quickly the landscape changed from California to Nevada. I had been to Las Vegas before and expected a similar desert around Reno. But it wasn’t at all like that. There were mountains with beautiful valleys, forests, rivers, and lakes. 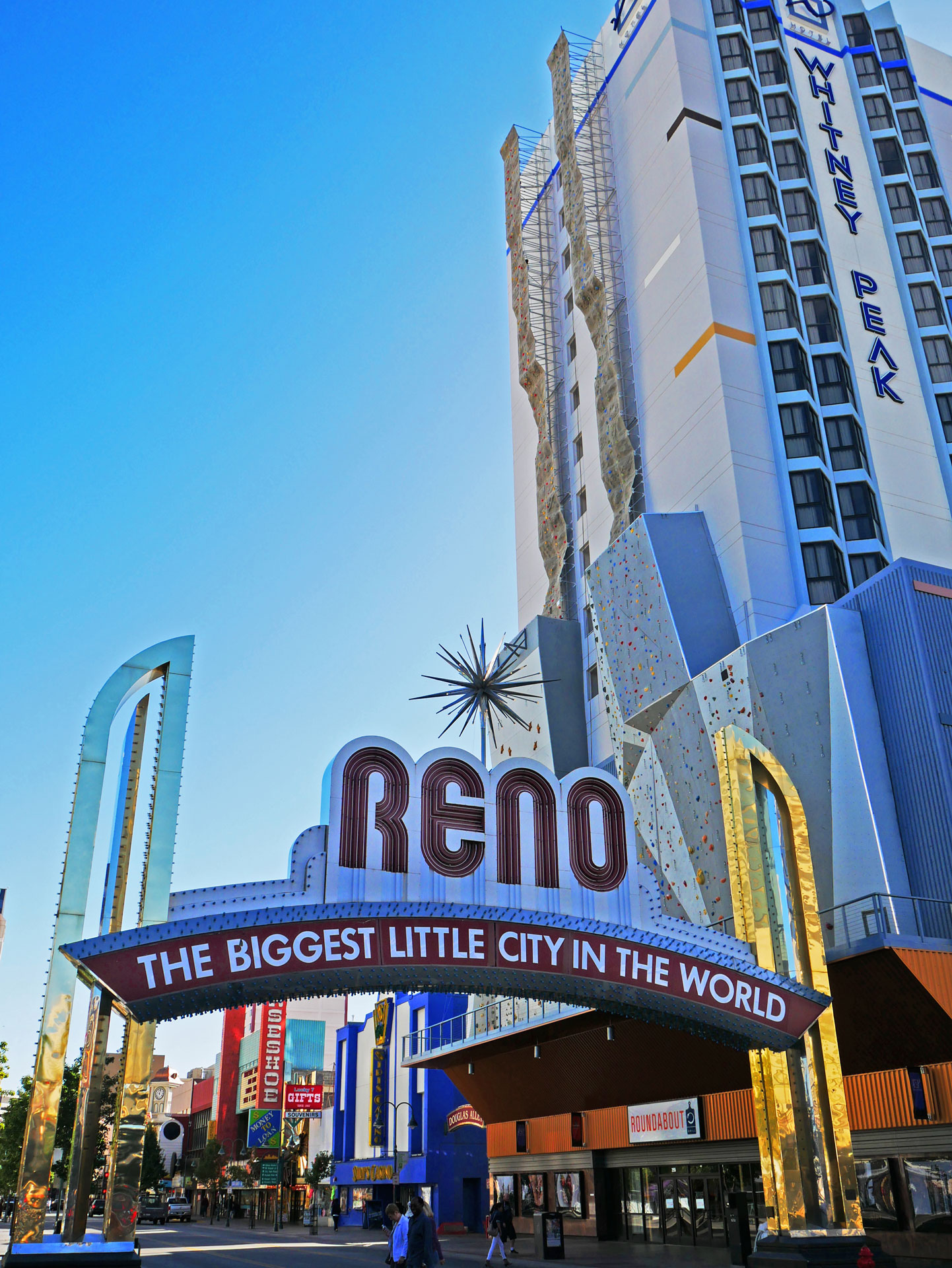 You can find the famous Reno Arch with the city’s motto on Virginia Street, which is home to many casinos and hotels. There are many interesting things to see like the climbing wall on the hotel behind the sign.

The city itself looked like a small version of Las Vegas though, with lots of casinos and hotels. From the bus terminal, I took a Lyft taxi to the couchsurfers’ place. They weren’t home but had told me before how to get in. And their housemate was there when I arrived. So I hung out with him and he showed me around their nice house.

The couchsurfers were actually the reason I went to Reno. I had hosted them at my place in Cologne back in June and we spent a really fun time together. So since Reno isn’t far away from San Francisco, I decided to stop by their place to see them again.

Rosa’s work was just next to her home and she stopped by to say hi shortly after I arrived and then went back to work. Some of their friends came over and we hung out, watching videos and chatting. Rosa joined us after her work. After catching up for a while, we went downtown to see more of the city.

We walked along Virginia Street which seemed to be Reno’s strip and main road for casinos and hotels. During the weekend I was there, the Street Vibrations took place. It’s a motorcycle rally that attracts many bike lovers from everywhere. So the city was filled with bikers, motorcycles in all different shapes and colors, and the sounds of their motors really did make the streets vibrate. The main road was closed to cars and instead, it was used for the festivities. There were booths with food, drinks and motorcycle gear, concerts, exhibits and the majority of people was dressed in black leather. It was really interesting to see. 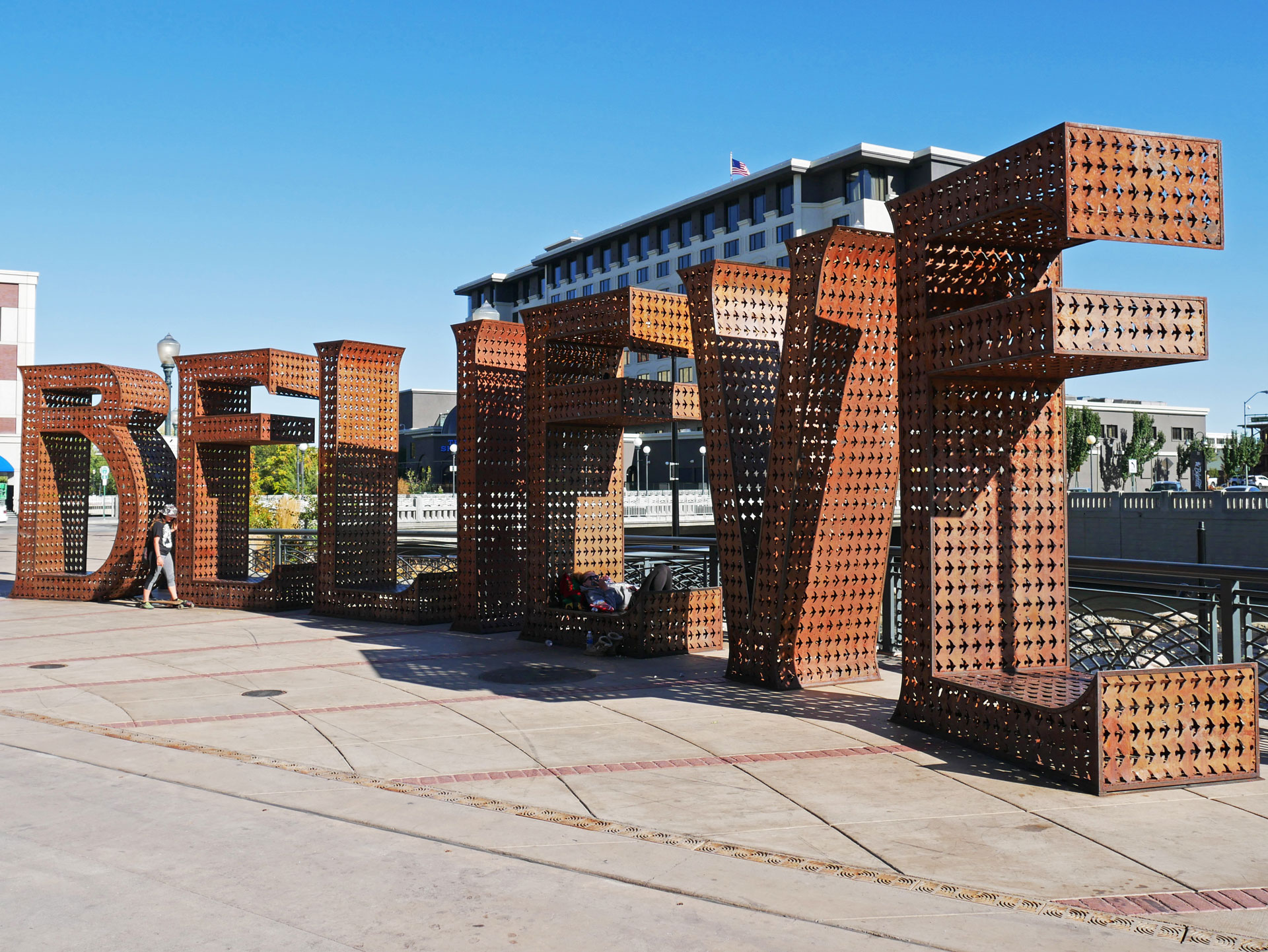 You can find many art installations all over Reno, NV. This former Burning Man sculpture is located on the City Plaza.

We went to “Awful awful burger” (The Nugget) which was a 24h restaurant inside a casino and had some nice fries. Afterward, we met up with Rosa’s boyfriend Aaron and continued our tour of Reno. We stopped here and there to look at some art installations and walked along the Truckee River. You can find a lot of cool art around the city, most installations were originally used for the Burning Man festival, which takes place annually not too far from Reno. We ended up in the bar Pignic Pub & Patio which had great live music and a beautiful outside area with fires. It was a really fun night.

Enjoying the Time in Reno

The next few days, I hung out more with Rosa, Aaron, and their friends, we went to all you can eat sushi, played the very fun game “Cards against Humanity”, I walked around the city, looking at the art during the day again, finally relaxed a little and were able to run some errands. I really enjoyed my time there and I’m pretty sure I will be back – either for Burning Man or snowboarding or better both. 😉

My next destination was Northern California and it would take me a pretty long time to get there. On the 3rd of October, I left Reno in the early afternoon, took the bus to Oakland, waited there for almost two hours to take the second bus to Eureka, where I arrived in the early morning.

See More Pictures of My Time in Reno, NV 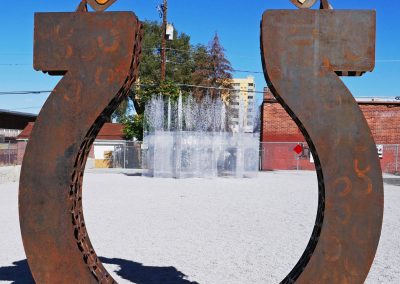 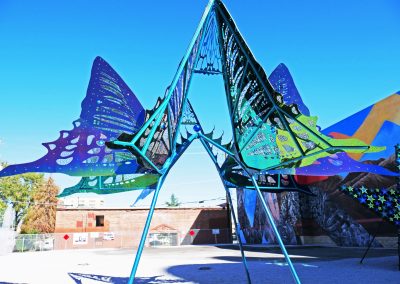 Here you get to the next place on my journey >

Sign up for the Peace Love Travel newsletter for more travel stories and tips: 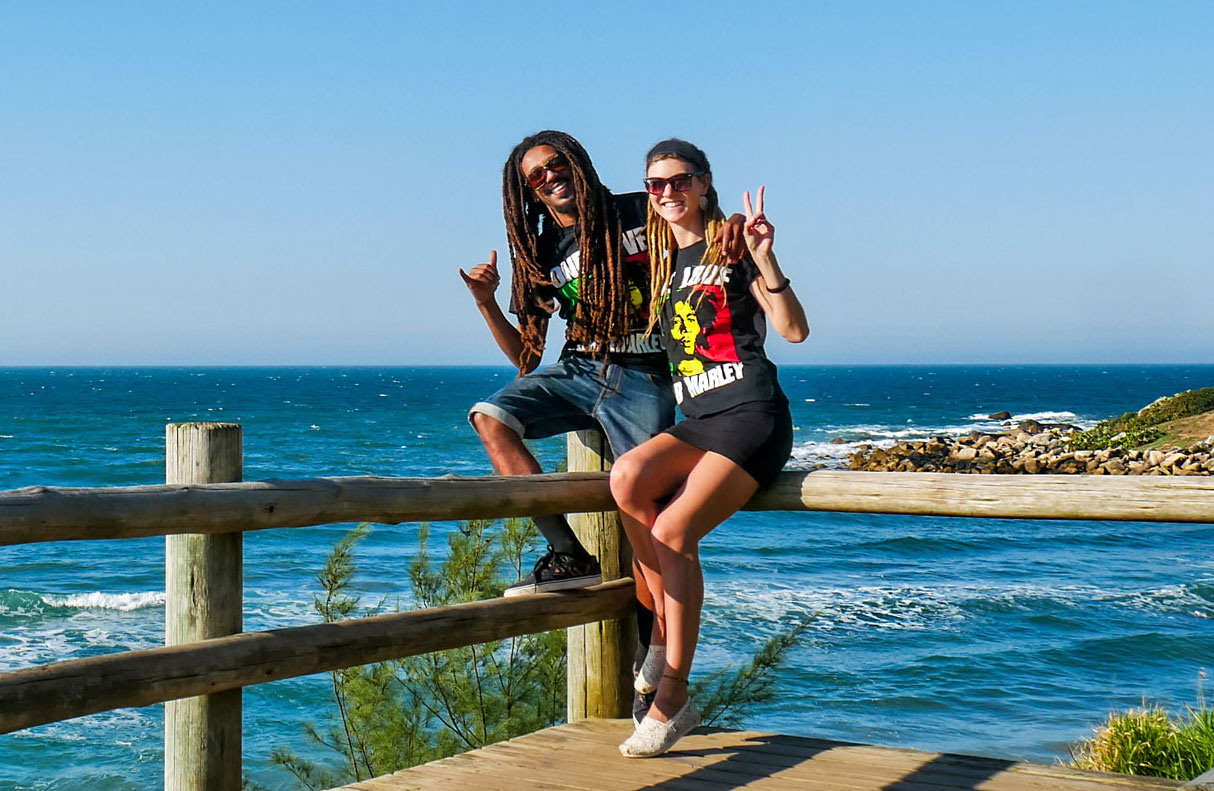 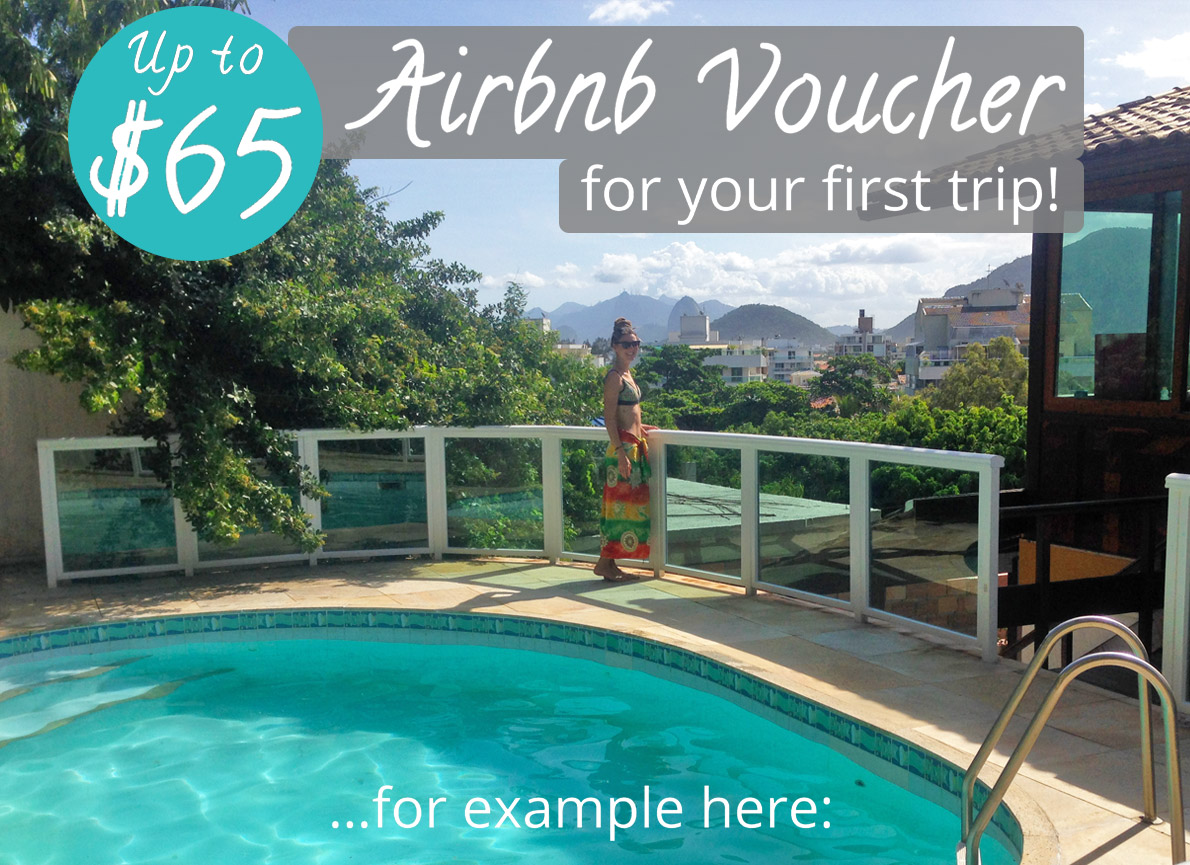 We already stayed in many cool Airbnb places in different countries. And continue finding new ones.

Perfect! If you sign up through the link below, you get a $35 travel credit!

Or learn more about Airbnb and our experiences here > 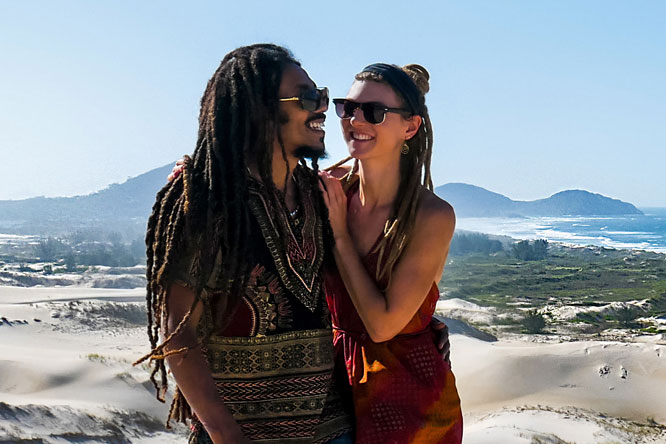 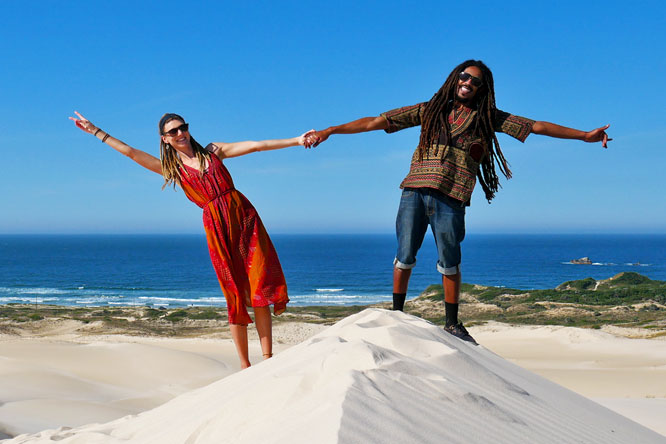 Read more about our journey & come with us > 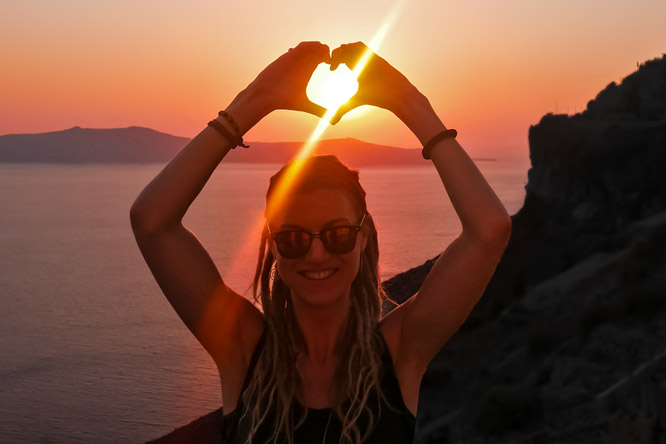 Let's spread more positivity >
This website uses cookies to improve your experience and to analyse our traffic. We'll assume you're ok with this, but you can opt-out if you wish.OK No Learn More
Learn More

This website uses cookies to improve your experience while you navigate through the website. Out of these, the cookies that are categorized as necessary are stored on your browser as they are essential for the working of basic functionalities of the website. We also use third-party cookies that help us analyze and understand how you use this website. These cookies will be stored in your browser only with your consent. You also have the option to opt-out of these cookies. But opting out of some of these cookies may affect your browsing experience.
Necessary Always Enabled
Necessary cookies are absolutely essential for the website to function properly. This category only includes cookies that ensures basic functionalities and security features of the website. These cookies do not store any personal information.
Non-necessary
Any cookies that may not be particularly necessary for the website to function and is used specifically to collect user personal data via analytics, ads, other embedded contents are termed as non-necessary cookies. It is mandatory to procure user consent prior to running these cookies on your website.
SAVE & ACCEPT